Over the years, designers, modeling agencies, and magazines agreed not to work with models under the age of 16. However, plus-size model Ashley Graham revealed she’s been posing in her underwear even before that cut-off age.

The size 16 model shared to Yahoo Style that she’s has been working as a model since the age of 14. According to her, “I was born plus-size! My first job ever was lingerie. My mom had to sign a petition that said they would airbrush my nipples out”.

Now that she is in her late 20s, Graham has achieved success in her modeling career, with her most recent project being Lane Bryant’s #ImNoAngel campaign. She is also making history as the first ever plus-size model to appear on Sports Illustrated’s swimsuit issue.

Even with her success, the plus-size model refuses to go under extremes. Instead, she dishes on a typical model diet. She said, “I don’t eat almonds and water! I try not to eat fried food. I don’t eat dairy”. 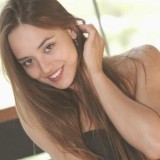 A Mass Communication graduate from Indiana University, I have been writing for corporate entities until I ventured into entertainment. Now, I am a freelance writer for Explore Talent, focused on television news and other updates.